The Toly Group has been operating in Malta since 1971. From humble beginnings, the group today is led from its Maltese headquarters and has exceeded global sales of €100 million.

In 2014, the group moved into new corporate offices with an integrated innovation centre. This fitted into its vision at the time to become the most creative company offering packaging to the beauty industry.

In 2017, excavation started for the building of a brand new purpose-built factory alongside the existing unit. The building is now complete, and in the final process of finishing and commissioning.

According to Chairman & CEO of the Toly Group, Andy Gatesy, approximately €20 million have been invested in a 20,000 sqm plant, built on a footprint of 5,400 sqm.

The new plant has been designed to be environmentally friendly, with two massive reservoirs, taking advantage of geothermal cooling, heat recovery from air compressors and chillers to use for production processes, full insulation, LED lighting, and an energy efficient plant with a full building management control system.

With underground parking, the building has five floors, including equipment on the roof, and is fully integrated with all manufacturing processes.

65% of production has now been migrated into this new plant. The manufacturing offices will move in May, with an official opening by the Prime Minister of Malta on June 28th.

The new building has space for 70 injection moulding machines and 25 assembly lines, and will enable the company to double its capacity from its historic plant.

"We are proud of our heritage in Malta and have been successful on this island, as our core values of people, passion, pride, and creativity mimic exactly the core values of the Maltese nation. We remain privately owned with a long-term vision, and with this new plant we are not only reinventing the way Toly manufactures, but also reinventing the vision for manufacturing in Malta‘', Andy Gatesy stated during Minister Cardona’s visit.

Toly CEO explains the outlook for 2022

The outlook for 2022 looks positive although there continues to be uncertainty around the covid pandemic. So at Toly we will focus upon what we can change.

In 2021, Toly continued to develop and launch many new exciting products across all our many categories.

Our theme for 2022 is: Be Different… Think Different, For a sustainable future. Read on to discover how we will achieve this.

With people still working from home, there has been a fundamental shift in the way that we work.  There is a new energy around people, a new understanding, and a new sense of empathy.  The world has realised that whether we are in Asia, Europe, or North America, we are all in this together.

Resilience is the Backbone of Toly

I always believe that Toly and its employees are different to the many competitors we have in our industry, and this probably goes back to our origins...

Toly have further complimented their sustainability offering, by creating 3-new products through their partnership with Paperfoam.

At Toly, we have created a business model that is different from our many competitors within the beauty industry...

Toly and Sulapac are delighted to announce that they have entered into a business partnership to be able to offer unique and disruptive solutions to accelerate growth in today's eco-centric, beauty world.

At Toly, our vision is to create a global beauty development platform, connecting ideas with know-how and capabilities. Effectively, we are an ecosystem of both internal and external resources.

Change is the only constant, and our Corporate logo is no exception. For Toly, we chose to keep elements of our original logo and built on to it, to mirror Toly’s success story over the last 50 years. This is why this year; we have officially changed our logo from Toly – Passionate About Packaging to include Building On Beauty.

Toly has announced a partnership with Dutch packaging firm Paperfoam®, which sees Toly take the exclusive rights to distribute jointly developed products for the Beauty Industry.

At Toly, our strategy continues to revolve around the four key pillars of People, Strategy, Execution, and Finance. Every crisis presents an opportunity, and as a company, we have been investing in order to develop.

On May 13th, Toly welcomed the Honourable Miriam Dalli – Minister for Energy, Enterprise, and Sustainable Development, along with the Chairman and CEO of Malta Enterprise to its Malta factory.

In line with our 2021 theme, I would like to share with you ten key points that I believe Toly must continue to focus on, such that we Play to Win.

Toly was the first business to operate within the estate, which signalled the start of the industrial revolution in Malta. For this reason, Toly is proud to also be celebrating its 50-year mark in conjunction with the estate.

Toly is Different and we are 'Playing to Win'

Innovation is the Currency of the Future for Toly

On March 23rd, Toly welcomed Dr Owen Bonnici – Minister of research, innovation and the co-ordination of post Covid-19 strategy, to its corporate offices in Malta.

During our virtual sales conference, we held the second edition of our core value awards programme, to recognise and appreciate people who consistently embody our core values and act as role models. Who won the 2021 Toly Core Value Awards?

We started the year extremely optimistic, building upon our “Scaling Up” theme for 2019, but little did we know that COVID-19 would hit the world with such a massive medical and economic impact.

The COVID-19 pandemic has disrupted the global economies and affected many businesses. Our core purpose remains to make a positive impact on everyone who touches Toly. In line with that, we would like to thank all employees, customers, and stakeholders for their ongoing support.

On August 28th, the Honourable Minister Silvio Schembri – Minister for the Economy, Investment, and Small Business, paid an official visit to Toly’s manufacturing plant in Malta.

The recent COVID-19 pandemic has put a strain on the medical and healthcare facilities as well as global economy. It has also highlighted the need for more investment and thought being put into simple medical devices which are specifically design for rapid manufacturing and deployment.

Earlier this year, Toly held its annual sales meeting in Malta, and during this event Toly launched its first core value awards.

This July, Toly were presented with an award at Cosmoprof Las Vegas for 'Best Skincare Packaging Design' for one of their latest Korean innovations – The Boost Mixer.

Toly has been operating in Malta for nearly 50 years, and in line with the changing market, the company decided to build a brand new plant and transfer all production lines from its old factory.

Toly is proud of what it has achieved over the past 50 years, constantly adapting to the changing market. It's passion and ambition will continue to differentiate it and motivate it to achieve further success.

In support of the Organ Donation Campaign, the Minister of Health, Mister Chris Fearne had the opportunity of getting a tour of Toly’s brand new factory, whilst also meeting the staff.

Toly Achieves its €100 Million Milestone Two Years Ahead of Plan 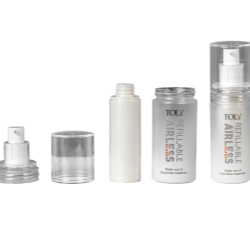 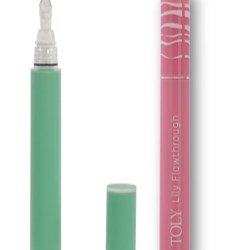 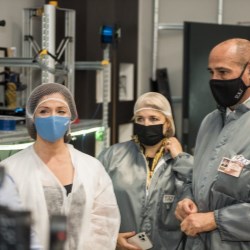 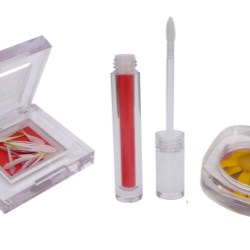 See Through Sustainable Beauty with the Chiaro Line

All you need is love.. and Toly's latest AMOR Click St...